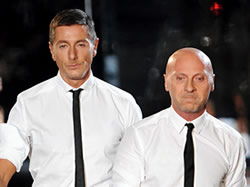 In December, co-founders of the famous high fashion label Dolce & Gabbana will go on trial for tax evasion in their native Italy.

Domenico Dolce and Stefano Gabbana are accused of selling their business to Gado Srl, a Luxembourg-based holding company, in 2004. The pair are said to have created the company in order to carry out a plan not to pay taxes, Women’s Wear Daily reports.

Authorities began investigating the pair in 2008, and took a subsequent look into apparent tax irregularities within the company. Charges previously brought against the design team include making false earnings statements that neglected to report some $540 million in income. Those charges were dropped last year when an Italian judge cited lack of evidence.

Prosecutors filed an appeal with the Italian supreme court, which found that this method of tax evasion to be a criminal offense.

This kind of behavior is far from unusual, and the two design mavens are not the only millionaires who prefer to hoard as much money as possible.

Former Republican presidential candidate Mitt Romney is known to use a Swiss bank account and be in possession of investment funds in the Cayman Islands. Both locations are famous banking locales used by those who wish to keep large amounts of money away from their respective governments.

Earlier this year, one of the founders of Facebook was thrust into the spotlight when he gave up his U.S. citizenship in order to keep millions of dollars from going to pay taxes. Eduardo Saverin became a Singapore citizen just before the social network site went public in May.

10 May 2013
Unger comments to E! News on Celebrity Fraud Case

In Milan, Italy, a local court has convicted Demenico Dolce and Stefano Gabbana of tax evasion. The court said that…

Philadelphia rapper Beanie Sigel, born Dwight Grant, was sentenced to two years in federal prison stemming from charges that he…