If you have fallen behind on your taxes, you may be interested to know that some of the very people tasked with enforcing the tax code are delinquent on their taxes as well. This lack of compliance is not just present among IRS employees; many federal employees have overdue tax debts. A good argument could be made for relieving these public employees from duty, and that argument is being made by Rep. Jason Chaffetz (R-Utah). 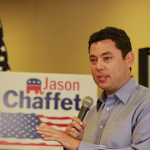 Rep. Chaffetz introduced a bill that would require the removal of federal employees who are not paying their taxes. In addition, potential federal employees with significant tax debts would no longer be eligible for hire. He believes that tax delinquent employees are biting the hands that feed them and that their lack of compliance is indicative of the quality of work the American people can expect from them.

Another bill that Rep. Chaffetz has had a hand in would require federal contractors and grant seekers to be tax compliant prior to award.

These bills reflect a general attitude some lawmakers are trying to convey: Failure to pay taxes will not be rewarded. In a press release, Chaffetz stated, “The very least an individual on the federal payroll can do is pay their taxes.” Ironically, members of Congress will not be held to the same standards.

While the second bill has bipartisan support, some Democrats don’t believe that terminating current federal employees is the answer. Unemployed individuals don’t tend to have an easier time paying off their debts. Also, the unemployed may qualify for public assistance, costing taxpayers even more money.

Besides, the rate of delinquency among federal employees is nowhere near as high as the rate among the American population as a whole. According to IRS data, only 3.2 percent of public workers are behind on their taxes, while 8.2 percent of the general population is overdue.

Perhaps the time and energy of lawmakers would better be spent simplifying the tax code, which may help improve tax compliance on all levels.

Taxpayers May Be Eligible for Late Payment Penalty Relief

Because Congress took forever to pass the American Taxpayer Relief Act (“ATRA”), the IRS was not equipped to process forms…

29 Mar 2013
I Have Not Filed a Tax Return in Years and Another Tax Season is Here!

If you have not filed your taxes and you have an obligation to file, then you must address the situation…