How to Defeat the IRS? Leave that up to Congress. 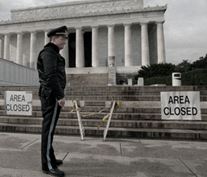 If Congress fails to approve a 2014 federal budget or short-term funding bill, then it is expected that Treasury and the IRS will reduce their operations.

To date, Treasury has not announced a plan in the event of a government shutdown. In 2011, the government had been faced with the similar situation. At that time, Treasury announced that the IRS would halt non-automated collections and tax processing. Therefore, Revenue Officers, local investigators in charge of tax collection and tax compliance, would be out of work until a resumption of operations. This is not a smart move considering the overwhelming deficit and that 6 billion dollars of back taxes is waiting to be assigned to collection personnel. Treasury had further stated that the IRS would also halt taxpayer services involving customer care.

In 2011, Treasury stated that if the federal government closed, appointments for tax audits, collection, appeals conferences, or the Taxpayer Advocate would be cancelled.

Currently, the White House and Republications are far apart in negotiating the FY 2014 budget which starts October 1, 2013. The Patient Protection and Affordable Care Act is the problem. Recently, the House approved a short-term funding bill which included a provision that defunds the controversial Patient Protection and Affordable Care Act. President Obama stated that he would veto the bill.

October 15, 2013 is the extended deadline for the 2012 Form 1040. With millions on extension, it is a scary thought what would happen if the IRS shuts down.

To date, Treasury has not discussed a contingency plan.

The IRS is Closed… Now What?

Because Congress failed to approve a 2014 federal budget, the IRS has curtailed its operations. If you have a question,…