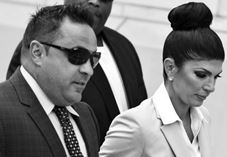 Known for their roles in the reality television show The Real Housewives of New Jersey, Teresa and Giuseppe “Joe” Giudice could be facing even more drama after pleading guilty on March 4 to federal charges of committing a long-running financial fraud. The charges include conspiracy to commit mail and wire fraud as well as three types of bankruptcy fraud. Mr. Giudice also pleaded guilty to failing to file a tax return in 2004, admitting to not having filed taxes on income of approximately $1 million over four years, between 2004 and 2008.

By pleading guilty, the Giudices admit to having submitted false tax returns and W-2 forms. If convicted, Mrs. Giudice faces 21 to 27 months in prison, while Mr. Giudice faces 37 to 46 months in prison. Prior to entering their guilty pleas, sentencing for the couple had been set for July 8. They had initially faced more than 40 counts.

Trouble began last year for the couple, when they were charged with exaggerating their income when applying for loans. They were applying for loans before The Real Housewives of New Jersey debuted in 2009, and then hid the large amount of income they had made in a bankruptcy filing after the first season. According to court documents, the Giudices claimed to owe $11 million between mortgages, debt to Neiman Marcus and Nordstrom, and debt to a fertility clinic.

It was revealed that Mr. Giudice is actually an Italian citizen. In addition to facing jail time, he also faces the possibility of being deported once his prison term is completed. Prior to this revelation, Mr. Giudice was not aware the he wasn’t an American citizen. He came to the United States as an infant, according to his attorney, Miles Feinstein.