The Big Apple will Take a Bite Out of Your Paycheck

Maybe, Frank Sinatra was thinking about New York’s tax rate when he was singing “New York, New York.” The Tax Foundation is a conservative think tank that has been tracking state tax rates since 1977. Their latest report indicates that New York has again landed at the top of the list with the highest combined state and local tax burden in the nation. New York has held that spot in every survey that has been conducted.  “If I can make it there, I’m gonna make it anywhere.” 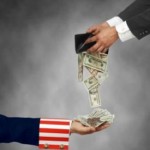 According to the Tax Foundation, the fault in New York lies in their high level of state expenditures. New York Governor Cuomo stated that he has implemented tax breaks for his state since he took office in 2011. He cited a local property tax cap he approved last year and an income tax cut for those in the middle and upper class tax brackets this year. Cuomo approved a tax increase from 6.85 percent to 8.82 percent for those with a seven-figure income. This actually resulted in a tax break for them because the state had temporarily raised their taxes to 8.97 through 2011.

According to E.J. McMahon of the Manhattan Institute, New York has a long way to go to bring the tax burden on its citizens within range of the rest of the nation. He stated that New York would have to cut $3 billion from its tax burden before it would match New Jersey and approximately $37 billion before it would be even with the national average.

In 2010, the average tax burden on New York’s citizens was 12.8 percent or $6,375 for every person in the state, including children. There are only three states that have a tax burden that is above 12 percent. Those include New York, New Jersey at 12.4 percent and Connecticut at 12.3 percent. The national average of income paid for taxes is 9.9 percent. Alaska, at 7 percent, has the lowest tax burden of any state.

If you are in the greater New Jersey or New York area, and are in need of legal advice regarding your back tax problems, contact experienced tax lawyer Todd Unger today!