How to Get Rid of a Tax Problem? Go Country. 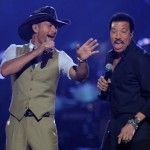 To promote the album, CBS aired a special concert event recorded at MGM Grand Garde Arena where an army of superstars saluted the icon.  But why?  Why has this R&B and pop legend gone country?  I think we may have found the answer.

Hello?  Is it me you’re looking for?

When you owe the IRS back taxes, a tax lien arises automatically which is known as a “secret” lien.  The tax lien arises as a matter of law against a taxpayer without the necessity of filing a public.  However, the statutory or “secret” lien is not effective against any purchaser, holder of a security interest, mechanic’s lienor, or judgment lien creditor until a Notice of Federal Tax Lien has been filed. By filing a Notice of Federal Tax Lien, Lionel Richie’s creditors are publicly notified that the IRS has a claim against a taxpayer’s property, including property acquired after the lien is filed.

I guess it wasn’t “easy” to get money from the Commodores, his ex-bandmates (joke rimshot). Therefore, the only other solution: Going Country.  Tuskegee debuted at No. 1 on Billboard‘s country albums.

A tax lien can have devastating consequences such as tarnishing a taxpayer’s credit, making it difficult to refinance and borrow against property, impairing title, and in some cases, the loss of a job.  If you have been notified by the IRS that it has or is about to file a tax lien against you, the Law Offices of Todd S. Unger, Esq., LLC may be able to help. Call us today at (877) 544-4743, or fill out a contact form and request a consultation.